Guidelines for School Delays and Closings Due to Inclement Weather:

Concrete rules do not exist in making decisions regarding variable and extreme weather; however, these guidelines will serve as a reference for DeKalb County Central United School District (DCCUSD).
Each morning between 4:30 a.m. and 6:00 a.m., road and weather conditions are monitored. Additionally, weather reports from multiple sources are monitored as well as information from city, county, and state road crews.
Beliefs

Delaying or Closing School is Based on Multiple Variables

Please remember, concrete rules do not exist in making decisions regarding variable and extreme weather; however, these guidelines will serve as a reference for DeKalb County Central United School District (DCCUSD).

Each morning between 4:30 a.m. and 6:00 a.m., road and weather conditions are monitored. Additionally, weather reports from multiple sources are monitored as well as information from city, county, and state road crews and law enforcement.

The need for driving slower and allowing for additional travel time does not necessarily indicate that conditions are unsafe for travel to or from school. It is understood that varying interpretations and opinions exist in terms of a “right” decision regarding whether or not to delay the start of school or close for the day. However, before a decision is made, as much information is gathered as possible. DCCUSD is comprised of 165 square miles of DeKalb County; it is possible that one part of the district is experiencing safe conditions, while another part is not. Likewise, it is possible for other school districts to be experiencing different weather/road conditions than those within DCCUSD.

Either 2-hour or 3-hour delays could be implemented. Please refer to information from your respective school in terms of starting and ending times for a 2-hour delay schedule and a 3-hour delay schedule. If you have not already done so, please develop alternate plans for child care. Alternate child care plans should accommodate the possibility of (a) school closing for the entire day, (b) the implementation of a 2-hour or 3-hour delay schedule, and (c) the early closing of school. The ultimate decision of whether school will be closed, delayed, or closed early is based on whether our buses can safely transport students on DCCUSD roads. The decision on whether it is safe enough for teenagers to drive is a personal decision between each parent and teenager.
Two-hour delays are the most commonly used delay option because the State of Indiana requires a minimum number of days and a minimum number of minutes per day. A 2-hour delay complies with Indiana’s emergency situation daily minimum minute requirement.  If a two-hour delays falls on a Wednesday where we already have a scheduled one-hour teacher professional development, then it becomes a normal two-hour delay just as it would any other day of the week.  In the case of a delay, school breakfast will NOT be served.
If a 3-hour delay is implemented, which is possible in order to reduce the number of needed make-up days, an additional hour must also be added to the end of the day. This additional hour at the end of the day is required in order to comply with Indiana’s emergency situation daily minimum minute requirement.  In the case of a delay, school breakfast will NOT be served.
Early Dismissal

It is extremely rare that school will be closed prior to the scheduled end of the school day. This option will be used only if extreme weather conditions jeopardize the ability of DCCUSD to safely transport students to their homes/bus stops at the end of the day. If school is closed early on the same day that began with a delay schedule, then the state does not count the day towards complying with the 180-day minimum requirement; therefore, a makeup day will be required.


Cancellation of After-school and Weekend Activities

In the event of countywide inclement weather conditions, or if a storm worsens during a regular school day, DCCUSD may decide to cancel a portion or all after-school, evening, and weekend activities. This is determined by the same multiple factors listed above for school delay and cancellations.

When traveling for events and games, the weather conditions in both our district as well as the district to which we are traveling will be taken into consideration.

The most unpredictable weather variables are freezing rain/sleet and dense fog. Freezing rain/sleet is temperature sensitive and, like dense fog, fast-occurring. Each begins and ends with little notice. When freezing/rain sleet are predicted or when dense fog appears, the decision regarding whether or not school is delayed/closed will occur at the latest possible time in an effort to observe the most current and local conditions.

Snowfall is more predictable than freezing rain/sleet. Meteorologists typically give predictions that include at least a 2-inch variance. Because of the variance in actual snowfall when compared to predicted snowfall, the decision regarding school status is not determined until the snow accumulation indicates a need for action. Such a decision, except in extreme situations, will generally be made in the morning.

When snow accumulated to significant levels, or is at such a level with more snowfall predicted, then a decision regarding school delay/closing may be made the previous evening. A significant level is one in which local city, county, or state authorities have indicated that it is unlikely for streets, roads, or highways to be passable by the following morning.
Extreme Cold (see below chart from the National Weather Service) 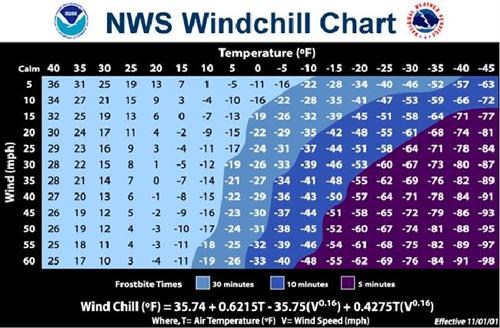